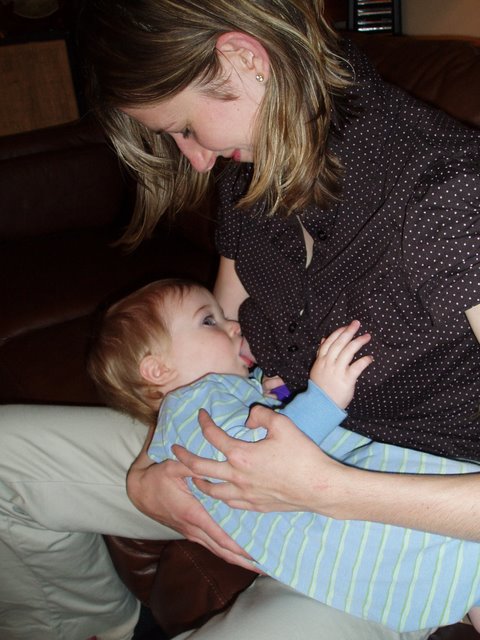 Women should be breast feeding their babies for the first six months without adding any solid foods or formula, say the experts, including the World Health Organization and the Canadian Pediatric Society.

The latest guidelines replace previous advice that moms could add solid foods or formula to their babies' diet along with breastfeeding at four to six months.

Just Breastfeeding for Baby for the first 6 Months?

Here's what the research says about bottle feeding and infant allergies, toddler allergies:

Breast milk is rich in an immunoglobulin called secretory IGA, which acts as a protective paint, coating the intestines and keeping food allergens out of the bloodstream.

Exclusive breastfeeding for six months increases the protection against  infections that can cause diarrhea.

Why a Higher IQ and Healthy Kids?

When you take the time to nurture your baby with your own milk, you can be happy about these benefits:

Only 10% of breast fed children do not have a higher IQ because they lack a gene that is needed for this effect, according to Dr. Terrie Moffitt, a professor of brain sciences in London, England.

The effects are life-long:

Adults who were breast fed had lower BMI (body mass index) on average, and had higher HDL (good) cholesterol than their bottle-fed counterparts.

So, maybe it is worth some "inconvenience" to get your baby off to a good start with no infant allergies or no toddler allergies!

Breast feeding also has a bonus for YOU because it protects the mother against future breast cancer.

"Breast feeding means not having mothers give babies infant cereal at four months, extending the period where the baby's sole source of nutrition is breast milk," says Dr. Boland.

"This excludes formulas and all solids -- cereals, fruits, vegetables, meats, any of the usual infant foods."

The Canadian Pediatric Society now says that along with introducing babies to solid foods no earlier than six months, breast feeding can continue for up to two years and beyond.

Doctors are struggling to get women to extend their duration of breastfeeding, according to Dr. Boland.

Why Delay Solids against Allergies? 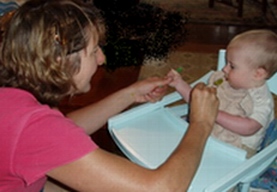 Even if breast feeding and you feed your infant solid foods (especially those containing protein, such as wheat, soy, and dairy) before the intestinal lining is mature, food allergens can seep into the bloodstream, causing baby to build up antibodies to those allergens and later become allergic to those foods.

But the new science for preventing allergies suggests introducing baby solid foods to baby all at once, and not holding back these foods.

By twelve months of age, your child's intestines are mature enough to screen out most of the food allergens, to prevent food allergies.

The intestines are the body's filtering system, screening out potentially harmful substances and letting in healthy nutrients.

As a result, allergens can enter the blood stream, causing the immune system to produce antibodies to that food, thereby creating a food allergy.

Breastfeeding is still best between four and seven months when a baby's intestinal lining goes through a developmental growth spurt called "closure," meaning the intestinal lining becomes more selective about what to let through.

You will want to carefully watch if there is a family history of food allergies, and carefully introduce foods to which other family members are allergic.

But be sure to know the latest research about not avoiding foods that cause allergies altogether:

During pregnancy there is usually very little focus on breast feeding. We expect it to be natural, which it is, but it is not necessarily easy.

Find out from the  LA LECHE LEAGUE for nursing mothers if there is a local leader or a support group, or get one of the following books by the experts or by mothers who have gone through it all.

Children who were breastfed as babies had higher scores on tests of VOCABULARY and REASONING at age FIVE, than those who were NOT breast fed.

Amanda Sacker, one of the authors of the study from the Institute for Social and Economic Research at the University of Essex, England, suggests the following:

Or, "there could be differences in hormones and growth factors which are lacking in formula."

The study accounted for differences in moms education and income.

(published in The Journal of Pediatrics)

Which legal and illegal drugs affect your baby when nursing?

Both prescription drugs and street drugs will affect your baby while breast feeding!

Before you begin nursing, you will want to increase your awareness of the effects of the following on your baby:

Be aware of anything you are taking that might harm your baby.  These can be both legal and illegal.

We hope that you will be able to treat yourself and your baby to 6 months of special nourishing and bonding!

Breast feeding benefits for baby's brain, IQ and helps avoid toddler allergies -- and a baby eczema food allergy and even against a peanut oil allergy.

What about introducing solid foods to baby?