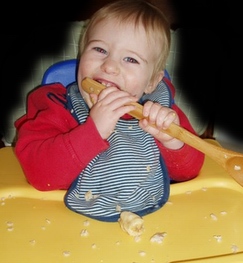 With the immature digestion of a baby less than one year old, the botulism bacteria could cause problems, if present, and this is possible in honey, though not overly common. 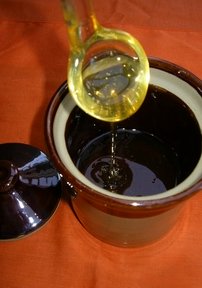 Because delaying the foods that can cause allergies, has NOT been shown to prevent allergies.

Here’s what research has found, that can help you find best first foods for baby:

Experts are now recommending to introduce all foods except honey, by the age of 6 months. This includes giving babies gluten, eggs and nuts!

You already know that by breast feeding for the first six months, you set your baby up for a healthier start.  Scientists have found that formula feeding increases, among other things, the risk of obesity in later childhood.

One of the reasons for this is that formula fed babies have more inflammation causing gut bacteria, which can cause problems later on. Gut bacteria certainly play a part in adult obesity.

But if you are introducing solid foods only by six months, as the guidelines suggest, you don’t need to worry about causing allergies by giving gluten, nuts, eggs and wheat too early.

But when gluten foods were introduced at 6 months, scientists found no greater risk for babies to develop celiac disease or for Type 1 diabetes.

Yes, if babies are given foods with gluten BEFORE the age of 3 months they do have a much higher risk of getting Type 1 diabetes, say researchers.

Starting Baby on Solid Foods: All Foods and Nuts!

Avoiding any foods is no longer being recommended after a baby is 6 months. There has been a turn-around in thinking – so that exposure is now considered to actually be better than avoiding.

In fact, the experts are now saying that introducing allergenic foods early can indeed lower your baby’s chance of developing allergies later on!

Simply watch for allergy symptoms if you have reason to worry. 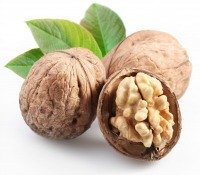 Instead of AVOIDING certain foods, scientists are now showing us to instead, have a diversity of friendly gut bacteria for protection.

If your baby had a natural vaginal birth and is being breast fed, it is getting the best start with exposure to friendly bacteria. If not, you may need to add pro-biotics:

After a C-section birth, formula feeding or even with a genetic risk of Type 1 diabetes, it would be best to focus on pro-biotic supplements and adding pro-biotic foods.

Giving babies pro-biotics has certainly been found to lessen the risk of Type 1 diabetes in those with genetic risks.

Even peanut allergies – the dreaded peanut butter allergy – is on its way to being solved.

Scientists have found a probiotic bacterium called Lactobacillus rhamnosus that is helping to cure peanut allergies.

With the help of this pro-biotic scientists were able to de-sensitize kids, meaning they no longer reacted to peanut exposure for at least 2 to 5 weeks. 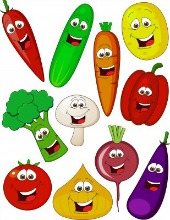 We hope that you have found our baby solid food guide helpful for preventing allergies.