How to Improve Memory Loss: Why not Meds but Diet and Brain Health Supplements?

How best to improve memory loss?

Want to avoid fuzzy thinking and dementia at any age?

Want to stay sharp regardless of your age and do more than just brain teasers -- they may be fun, but don't really help.

But first, here's what what to check first:

You may have to think hard about ever high cholesterol medication -- the most lucrative and most prescribed drugs in the world. Why?

Statins may hurt your brain and ability to think and remember. How?

Turns out that cognitive effects are the second most common problem after muscle aches reported by patients to the Statin Effects Study at the U. of California, Sandiego.

Statins are high cholesterol medications such as Lipitor, Simvastatin and Zocor.

The brain is largely cholesterol, and much of this is in the myelin sheaths that insulate nerve cells and the synapses that transmit nerve impulses.

Cholesterol is a fat that is required by the brain to function properly as we get older!

Some doctors think that high cholesterol medications can:

This effect has already been reported by research:

The found that total levels of cholesterol and fats in the blood did NOT have an association with memory loss in this study.

Typically, this early memory loss often precedes the development of dementia in the elderly --  vascular dementia as well as Alzheimers Disease symptoms.

What is the explanation for improving memory loss?

Scientists are working to help us stop these risk factors because of the “dementia time bomb” due to the fact that the growing age group of people of 65 plus.

(A. Singh-Manoux, French National Institute for Health and Medical Research and the University College, London.)

How are YOUR Medications Affecting Your Brain?

Anecdotes linking statins to thinking and the ability to remember are rampant, although the official effects of prescribed statin drugs such as Lipitor and Zocor, Simvastatin only mention:

Cognitive side effects such as troubles remembering and fuzzy thinking typical of dementia is not yet on the patient information sheet for Lipitor, the popular high cholesterol medication.

You will want to guard against vascular dementia symptoms as well well test Alzheimer early symptoms:

Prominent doctors have reported cases of Lipitor side effects where Lipitor was “making women stupid.”

Usually changes start to occur within six weeks of starting the statin, and their cognitive abilities return quickly when people go off them.

Instead, when they can become forgetful, those around them often assume that they have Alzheimers Disease symptoms.

For instance, a San Diego woman, aged 69, became so forgetful that her daughter began to find Alzheimers care for her.

Usually, neither a family doctor nor family members suspect the medications people are taking, to be robbing them of their mental capacity – instead they simply blame their age.

“My Father is Playing Bridge Again After Stopping His Heart Meds”

Margaret's father had his meds reduced, with exciting results:

"Our family has recently witnessed the remarkable improvement in our 88-year-old father when an astute specialist in internal medicine pulled him off three of the medications he'd been prescribed by his family doctor (high blood pressure medication, high cholesterol medication, and a prescription nasal spray).

In four days his blood sugar dropped from 25 to 7, his dizziness was gone, he stopped falling down at night, and his appetite was back.

Dr. McCullough's experience has been that elders later in life do better on almost no medication!

There are two other, stronger predictors of heart disease and of an eventual heart attack:

Over the past 10 years, researchers have found that runaway inflammation in most major health problems.

A major study in The New England Journal of Medicine, reported that those with high CRP levels were four and a half times more likely to have a heart attack!

Better cognitive performance has already been linked to a diet with lots of berries, spinach, fish, fruit and vegetables.

The ability to remember words and their meaning is especially vulnerable to the effects of aging and Alzheimers Disease, they are finding.

Source: American Journal of Clinical Nutrition. A study of 1,533 healthy men and women, aged 45 to 60 who for 13 years were checked for their diet and cognitive function -- ability to remember.

Aim for 7 to 10 servings of fruit and vegetables combined, daily:

This antioxidant protects brain tissues from oxidative damage and inflammation, which increase the risk of cognitive impairment and of Alzheimers Disease.

Include at least 3 servings of fruit and veg high in vitamin C and here are the best: 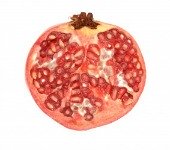 Vitamin E is thought to lessen the toxic effects of beta-amyloid, a sticky protein linked to Alzheimers Disease.

The best sources are:

These contain polyphenols, that protect brain cells by fighting free radical damage, reducing inflammation and increasing the clearance of toxins and toxic proteins that build up as you age.

Turns out that eating junk food shrinks your brain, and so does lack of exercise!

"Brain size shrinks in late adulthood, which can cause memory problems. Our results should encourage well-designed trials of physical exercise in older adults as a promising approach for preventing dementia and Alzheimer's disease,"

(Kirk Erickson of the University of Pittsburgh,the journal Neurology)

This study of nearly 300 people in Pittsburgh who kept track of how much they walked each week showed that those who walked at least six miles had less age-related brain shrinkage than people who walked less.

Alzheimer's disease, the most common form of dementia, slowly kills off brain cells, and activities like walking have been shown to BUILD BRAIN VOLUME.

"Our results are in line with data that aerobic activity induces a host of cellular cascades that could conceivably increase gray matter volume," they explained!

There are protective brain health supplements you may want to try: