Here’s what you need to know about toxic chemicals called “plasticizers” and “endocrine disruptors!”

No, they may not cause baby allergies or toddler allergies, but can set the stage not necessarily childhood cancer, but future cancers even in the next generation.

What's the problem with BPA's?

Most sports and baby bottles made in the USA used to have BPA, or Bisphenol-A in them. This is a  hormone-disruptor.

Sports and baby bottles become worn and scratched and begin to leach BPA into the liquids that's in them.

These chemicals -- phthalates, BPA and dioxins called ‘plasticizers’ that are known to be endocrine disruptors, or HORMONE disruptors.

Even in VERY SMALL DOSES, these are being linked to weight gain, obesity, and a host of problems such as diabetes, heart disease and cancer.

What are Hormone Disruptors?

Hormones are “messengers” produced by glands such as the ovaries, testes, as well as by the thyroid, adrenals and so forth, that regulate the body. 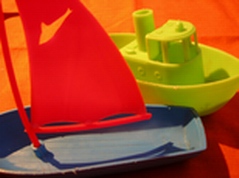 Scientists are now finding that EXTREMELY SMALL AMOUNTS -- parts per billion -- can cause problems in humans as well, and that there are likely NO “SAFE” LEVELS.

Although chemicals USUALLY need to reach a “threshold” amount to have a significant effect, researchers in the 1990’s began to report that VERY SMALL QUANTITIES of endocrine disruptors were causing problems.

Plastics, however, have been shown to be detrimental to the immune system, so that they deserve attention.

Why there are NO Safe Levels?

Recently scientists have been shocked to find that it takes only tiny amounts of these disruptors to “mimic” estrogen and thereby cause big changes.

And they are building up in our environment!

Extremely low doses of phthalates given to mice – in the low concentrations we might get from our water bottles -- can cause problems with male reproduction.

Scientists were also alarmed that many of these chemicals are showing up in the far away Arctic, and in freshly fallen snow and rain everywhere else. They are beginning to find these chemicals to be both PERSISTENT and ACCUMULATING.

The developing fetus is particularly sensitive to endocrine-disrupting chemicals.

Over many years and in many studies, phthalates have been shown to disrupt reproductive tract development in male mice.

But then Dr. Swan found a significant relationship even in humans between a mother's exposure to phthalates and problems with genital development in boys.

The developing fetus may be especially affected by endocrine disrupting chemicals, because it cannot fully protect itself. (detoxification enzymes are not completely functional, and the blood-brain barrier that is still being formed)

For chemicals that alter the hormone system, the timing of exposure is critical, says Richard Jirtle, a professor at Duke University Medical Center.

In an experiment published in Proceedings of the National Academy of Sciences, Jirtle found that feeding BPA to female mice changed the color of their babies' coats. BPA caused more than cosmetic changes.

In humans, endocrine disruptors are of most concern during critical windows of vulnerability, especially the first two trimesters of pregnancy.

What Products In YOUR Home Have BPA in Them?

Phthalates (pronounced THAL-ates) are human-made endocrine disrupters with anti-androgen activity, found in everyday products such as:

You and your Baby Are Not Protected

While "BPA-free" labels are  labeling has become common, but...

"The use of these chemicals is totally unregulated internationally," says Kathleen Cooper of the Environmental Law Association, "so even if there is a voluntary agreement in domestic markets, the cheap stuff from developing countries or export processing zones makes it on to our shelves and into our homes."

What to Watch Out For?

VINYL: Among the more worrying materials for contaminate leaching is PVC (polyvinyl chloride), commonly referred to as vinyl, or # 3 plastic.

The chemicals leached during the PVC lifecycle include mercury, dioxins and phthalates.

PVC is used in numerous consumer products, including:

Organizations including the U.S.- based National Toxicology Program, the Environmental Protection Agency, the International Agency for Research on Cancer and the National Institute of Occupational Safety and Health agree that:

Many advocacy groups, including Greenpeace, Children's Health and Environmental Coalition (CHEC) and the U.S.-based Center for Health, Environment and Justice (CHEJ) have called for a restriction or prohibition of PVC in consumer products.

The plastic ingredient used to line many kinds of food and drink cans called bisphenol-A, BPA may be poisoning pregnant women and infants.

So, unless plastics or cans claim to be "BPA-Free"...

BPA is a plastic resin repeatedly linked to a host of health problems including breast and prostate cancer, infertility, diabetes, obesity and asthma.

Cans of commonly eaten goods, such as soup, fruit, vegetables and soda, were found to contain more than 200 times the acceptable level of bisphenol-A, according to a study commissioned by an environmental advocacy organization.

In the working group's study, 97 canned foods from major chain supermarkets in Atlanta, Ga., Oakland, Calif., and Clinton, Conn. were tested for the presence of BPA.

In nearly half of the 97 cans, the BPA dose in a single serving was found to be 200 times greater than the government's traditional standard for safe levels of exposure to industrial chemicals.

The laboratory experiments performed in this study in March 2006 were contracted by the Environmental Working Group, a watchdog organization of scientists, lawyers and public policy experts based in Washington, D.C.

It’s official! Food additives such as colorings and preservatives play a "substantial role” in making young children hyperactive and prone to tantrums, according to new research.

In fact, the number of children classified as hyperactive fell to 6 per cent from 15 per cent when additives were taken out of their diet, according to research published in the Archives of Disease in Childhood.

John Warner, a professor in the Department of Child Health at the University of Southampton in England, said that:

Consumer Responsibility: It's up to You and Me!

Although research into vinyl chloride monomer and other chemicals continues, advocacy groups have called on consumers to pay attention to what's in the products they buy!

And make sure to let manufacturers and retailers know if you want more choice in terms of the materials in the products available they are selling.

While the number of products made of PVC can seem overwhelming, there are alternatives available to those who want them as the number of natural and non-chlorinated plastic substitutes in the market grows.

Here's What to Check on Labels and Packaging

At present, labeling laws do not require manufacturers to list all toxins used in the creation of their product.

However, there are easy ways to recognize a PVC-based toy or product:

Another clue to look for is the use of malleable or soft plastic.

Never put any warm food or drink in plastic and don’t use plastic cling wrap, especially on fatty foods which absorb the chemicals. 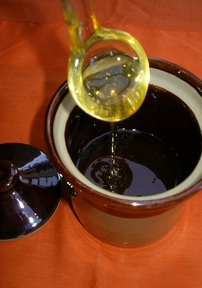 If your plastic wrap says that it is made without chlorine, that is a good thing, because that means that it is not PVC, such as Saran Wrap Elite.

You may want to pick toys from brands made with non-PVC-based plastic.

Another alternative is to purchase toys made from organic cotton or certified sustainable wood.

While avoiding all plastics is advised by some, it is not always practical. Thankfully, not all plastics are created equal.

Here are some suggestions for ways to avoid using plastics:

What Else Can You Do?

Are these polluting trends reversible? Absolutely. The answer lies with large corporations, obviously, to stop making these products.

But there are many things consumers can change, too. Here are some simple suggestions for avoiding chemicals:

If you do one thing, you should swap conventional cleaning products for more natural ones: use vinegar and baking soda instead.

Start buying organic produce of "the Dirty Dozen” that tested the highest in pesticide residue by the US Dept. of Agriculture:

Weeds are not the enemy; chemicals are. So if your dandelions are bothersome, pull the offenders from the roots.

So you could make dandelion wine or throw them into your salads like the French do! They are a good source of minerals and fiber.

Many municipalities have legislated against pesticides to date. Will yours be next? Some are planting wild flowers and attracting tourists instead of using herbicides.

Maybe it's time to come to terms with the future now. Even our family physicians are urging us to do so.

Use Less Plastics and Chemicals at Home

To reduce plastics and chemicals at home and work: buy recyclable glass and paper containers as much as possible.

They say that as long as the plastic wrap doesn't touch the food, it won't contaminate it. Why take the risk? Place food in pottery or glass casserole dishes instead.

Although you can scrub and peel your vegetables and fruits, there is no guarantee they will be totally free of pesticides.

Consider buying organic carrots, melons, berries, potatoes, onions, cabbage and other produce at grocery and health-food stores that carry them.

The non-organic varieties of these vegetables and fruits usually contain pesticide residues, according to the U.S. Food and Drug Administration Pesticide Program, Pesticide Residue Monitoring Survey.

Walk, bike, blade, or take public transit. New Yorkers are healthier than other Americans possibly because they walk more. Walk to work or to go shopping. Bad air quality has been linked to heart disease, and during the warm months it causing more severe respiratory problems among the elderly and those with lung diseases.

Why choose natural and organic?

Fire retardants are everywhere in clothes and furniture.

You name it, the list is growing! Here's another one:

Emulsifiers added to salad dressings and lots of foods so they don't separate...these are being found harmful to the gut:

Best Protection For Your Family and Your Health

While attention is usually on allergies -- food allergies more than chemicals for kids, scientists find it hard to narrow down the exact role of toxins in causing an allergy and the increased level allergies, mainly because we are all exposed.

You may ASK US for a recommendation for: